An extremely rare lighthouse lens is now set to light up Belfast’s maritime heritage as the ‘Great Light’, thanks to National Lottery players.  The Heritage Lottery Fund (HLF) has confirmed an award of £332,000 to restore and interpret the former Mew Island Lighthouse Optic and put it on public display in Belfast’s Titanic Quarter.

The optic is the machine which gave Mew Island Lighthouse its traditional revolving light. It is the world’s first and largest hyper-radial Fresnel lighthouse lens, first installed in Tory Island Lighthouse in 1887 then reconfigured and moved to Mew Island in 1928.The optic was removed from Mew Island Lighthouse in 2014 as the lighthouse was modernised and converted to solar power. At around 130 years old, weighing 10 tonnes and standing 7 meters tall, it is a unique heritage object of national and international importance with links to our maritime and industrial past. Its massive beam could once be seen by mariners over 30 miles away as it guided them to and from the busy Belfast Lough.

The new project from Titanic Foundation Limited, the charity committed to preserving Belfast’s maritime and industrial heritage, in partnership with the Commissioners of Irish Lights, will see the optic given a new role as an iconic attraction which brings to life the story of lighthouses, their technological developments, their light-keepers and their role in the maritime and industrial history of Belfast and beyond.  The rotating optic will be displayed in a landmark curved glass structure in its new location on the Titanic Walkway, which is currently being developed by Titanic Quarter Limited and funded by Tourism Northern Ireland. The 500 metres of maritime walkway will connect the Titanic and Olympic Slipways and the Alexandra Dock, linking Titanic Belfast, HMS Caroline and the Thompson Dock.

Announcing the award, Head of HLF Northern Ireland, Paul Mullan said: “It is with thanks to National Lottery players that this very rare and hugely significant artefact can be saved and given new purpose for generations to come.  Following its restoration the optic will act as a beacon to visitors and adds to the wealth of maritime heritage attractions on offer in the Titanic Quarter, and we are delighted to be involved.”

We are delighted to have secured support from Heritage Lottery Fund. Along with support from Ulster Garden Villages, Belfast City Council’s Local Investment Fund, Titanic Quarter Limited and Belfast Harbour Commission, this funding will allow us to save and restore an artefact of national and international significance. The Great Light will create a legacy Belfast landmark which will inspire future generations, enhancing Titanic Quarter’s position as a rich and authentic maritime heritage destination.

Alderman Tom Haire, High Sheriff of Belfast City Council and Chair of the East Area Working Group said: “We are delighted to have helped put this important maritime heritage asset on public display through our Local Investment Fund. We made a commitment in The Belfast Agenda to protecting and enhancing our environment and built heritage, and as well as helping to deliver on that objective, this project is also enhancing our ever growing visitor offer.”

Dr Tony Hopkins CBE, Chairman commented, “Ulster Garden Villages Limited is delighted to provide support to one of Belfast’s best known locations. The Optic will be a hugely important new landmark for the City. I am glad that we were able to react quickly to provide funding for this project and to ensure that this crucial part of our heritage can be saved for future generations.”

Yvonne Shields, Chief Executive of the Commissioners of Irish Lights, said “The Commissioners of Irish Lights are delighted to see our Mew Island Lighthouse Optic become part of Belfast’s world-famous Titanic Quarter. As “The Great Light”, the optic will tell the story of safety at sea, and educate generations to come on the science, engineering, and human effort that goes towards delivering this goal. In addition this will be a fabulous addition to our Great Lighthouses of Ireland tourism initiative that enables visitors to visit and stay in selected lighthouses around Ireland north and south.

“It is fitting that this unique Optic comes to rest at the end of an interesting journey in Belfast, the proud maritime and industrial city it has announced to seafarers for so long. We wish the Great Light and the Titanic Foundation every success with this exciting new attraction.”

In July 2016, Hall McKnight, a Belfast & London based Architectural Practice, were named the winners of a competition to design a structure to house the lighthouse optic and with the recent appointment of contractors Hugh J. O’Boyle Ltd, it is hoped that the optic will be in position later this year.  The ‘Great Light’ is an amazing piece of industrial and scientific heritage, which has certainly captured the public’s interest. To follow the developments follow them on Instagram – GreatLightTQ. 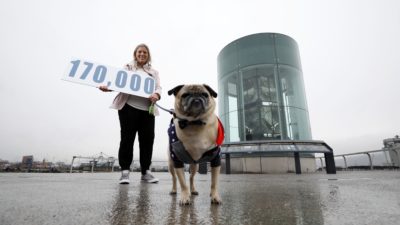 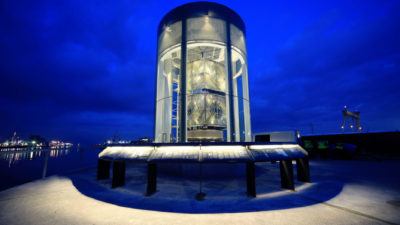 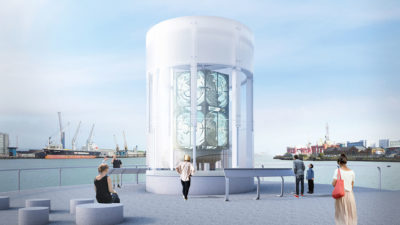